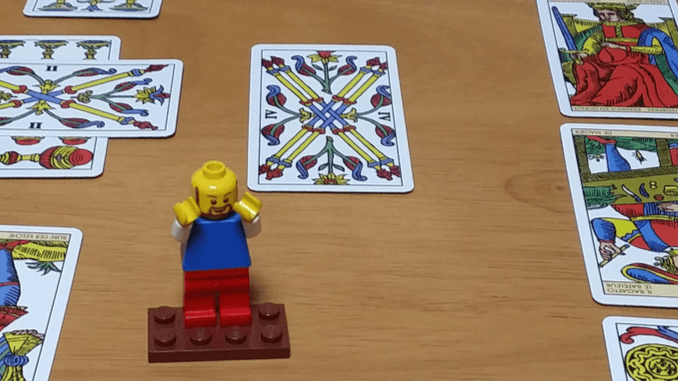 Here are the tarot spreads that show us the state of mind of the two captives and what they reveal to Sir Richard as he interrogates them.

What we discovered during the skirmish was that the first fellow to surrender, the one in the blue doublet and red breeches, was keener to negotiate than to fight, whereas the second was more pliable, willing to be led, belligerent but brittle of heart. The spreads offer us deeper insight into how those tendencies play out.

The 10 of Cups reveals the underlying situation for the first captive is one of deep unhappiness and discontent with the situation he was in. His problem is that he is now sees an opportunity to escape from his situation but his is not sure if it can be done or how his captors will treat him, as revealed by the 2 of Wands. However, the 7 of Pentacles Reversed indicates that he certainly wants to escape from the slavish circumstances of his immediate past in which he has been toiling away without receiving much reward for his labours.

Happily for him, the immediate future is indicated by the auspicious 4 of Wands, which represents his being welcomed into the service of his captors.

However, the 4 of Cups shows us that all he is aware of right now is a sense of discontent with his current situation which manifests in passive aggression and which may cause him not to see what is on offer at first. His discontent goes deep and the Page of Cups Reversed suggests that he has coped with his hard circumstances by repressing his deeper emotions. Right now he feels the poverty of his circumstances and sees himself as one of life’s losers as revealed by the 5 of Pentacles, and as someone who is surrounded by deceitful and unscrupulous scoundrels as revealed by the Magician Reversed.

In spite of all that, he hopes to have an opportunity to put his case clearly and to be heard objectively and fairly, and judge the case with sympathy, clarity and wisdom as indicated by the Queen of Swords; his fear is that his captors will wield the sword against him.

Now let’s see what the case is for the second captive.

From the second captive’s perspective the 5 of Swords confirms that the underlying situation is one of conflict and hostility which goes back to the circumstances, whatever they were, that led the five bandits to confront Sir Richard’s party, as is confirmed by the 5 of Wands showing how recent events (which, you may remember were triggered by the 5 of Wands on the first day of the adventure). We already know that the first captive and the leader of the bandits were motivated by quite different aims and that the second captive is malliable, a follower rather than a leader. Having lost the skirmish and three of his fellows, the second captive’s hostility may be directed towards both Sir Richard’s party and towards the first captive who was quick to surrender rather than to fight. The 5 of Swords suggests that the second captive is more interested in holding on to his grudge and his sense of being right rather than in cooperating with his comrade or his captors.

The problem that crosses his hostility now seems to be the hermetic quality of his captor (as revealed in the tarot reading for Sir Richard in the previous blog post), whose gentleness may well confound him. His immediate future certainly seems to be as unhappy as his conscious assumptions are intemperate. Deep down he burns with a repressed energy that he has not acted upon, leaving him feeling dissatisfied with himself, either following or resenting more dominant characters such as the leader of the bandits or the first captive.

Right now he sees himself as being ready, if given the chance, to walk away from the situation, simply to move on like the figure in the Rider Waite version of the 8 of Cups. However, the King of Cups confirms what we have already seen in the readings both for Sir Richard and for the first captive, that circumstances are auspicious because Sir Richard, represented here by the King of Cups, is a generous and well balanced leader. Thus the favourable offer that will be made to the two captives may well confound the second of them whose hopes and fears are bound up with the loss of his three pals in the skirmish, the pain of which he will carry with him, as the 6 of Swords indicates, whether he go with his comrade or go without him. Since the outcome is the Chariot Reversed, it seems to me that this fellow has lost any sense of direction at all, and in his aimlessness and resentful passivity he will grudgingly go along with whatever Sir Richard offers.