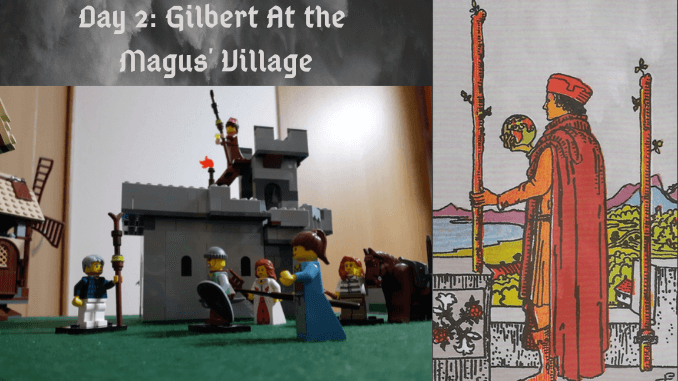 For most of the second day Gilbert the Yeoman had followed the course of the river as it meandered into the depths of a forest until, as dusk was descending, he came to the village of the Magus. It was a small settlement consisting of five buildings, a watchtower, a barn, a windmill and two solidly built dwellings.

When Gilbert arrived at the village he was greeted by a small party of women armed with pitchforks and a spear. Behind them, on the roof of one of the dwellings, an archer stood ready to shoot an arrow at him should the visitor prove hostile.

The proceedings were impassively observed by the magus who was standing on the parapet of the watchtower with his scrying glass in his hand. He seemed to have been expecting Gilbert’s arrival. With him on the parapet was an older man who seemed to be his personal servant. This man he dispatched to meet the visitor and escort him to the watchtower.

The magus descended the steps from the watchtower to the main platform and thuswise greeted the Yeoman:

“Thou art welcome, friend, for I percieve there is virtue in thee. Pray tell who thou art, whence thou comest and what thou seekest.”

Gilbert’s Message to the Magus

To which Gilbert replied, “I am here on my master’s business. My master, the right worthy Sir Richard Radclyffe by name, ventures upon a quest the manner of which he is as yet ignorant. He sent me hither to seek one of whom we heard, cunning in the arts of magic and who knoweth many things, that, if you are he whom he seeketh, when my master is afore you, he would heartily pray you offer him your best counsel.”

Hearing this, the magus rejoiced inwardly for he had seen in his scrying glass just such an one as the fellow described approaching him. Peradventure this was the one of whom the omens foretold, the King of Pentacles whom the magus had been seeking.

He replied: “Sir, I would that thou bring him hither that I might advise him what were best to do in his cause. But the day is far spent and thou art in need of victuals. Pray, sup with us this night, and renew thy strength so that on the morrow thou mayest go with my servant to fetch thy master and bring him hither.”

Gilbert Stays at the Magus’ Village

To this, Gilbert, though he were eager to return to Sir Richard, readily consented. And so he supped with the magus and his people, in the larger of the two dwellings, where a fire was lit in the fireplace and supper cooked over it.

He then retired to the great barn, where his horse had been stabled, and lay him down to sleep.

And so endeth the second day of Sir Richard Radclyffe’s quest.