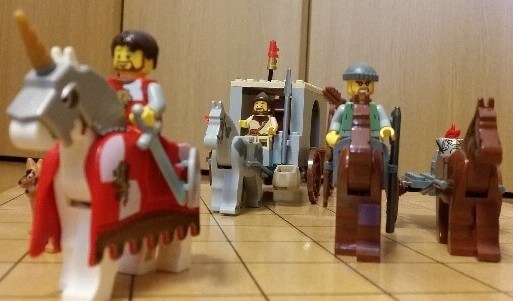 A gentle Knight was pricking on the plaine,
Ycladd in mightie armes and silver shielde,
Wherein old dints of deepe wounds did remaine,
The cruel markes of many’a bloudy fielde;
Yet armes till that time did he never wield:
His angry steede did chide his foming bitt,
As much disdayning to the curbe to yield:
Full jolly knight he seemd, and faire did sitt,
As one for knightly giusts and fierce encounters fitt.

Our knight, Sir Richard Radclyffe by name, is preparing to set forth “upon a great adventure” to “prove his puissance in battel brave… and his new force to learn.” He rides a white, caparisoned charger with chanfron and crinet. He has his shield by his side and his sword is sheathed. His arms are a golden lion rampant on red and white quarters. By his side run his two hunting hounds, Merriman and Belman.

Since the photo was taken of our hero riding out with his yeoman and his servingman, he has harnessed a second horse to the supply wagon and added a squire, fitted out with chain mail, helmet, shield, sword and provided with a horse, to his retinue.

Sir Richard’s yeoman rides a black horse and leads the horse that is harnessed to the war-gear cart. He is, just like Chaucer’s Yeoman, armed to the teeth. He is equipped with a longbow and quiver (whose “arwes drouped nought with fetheres lowe”), a two-handed axe, a cutlass and a hunting shield. He has a leather helmet and green forester’s jerkin.

In his supply wagon there are [as updated on 4th September 2018]:

On the war-gear cart there are:

As Sir Richard travels through unchartered territory he will encounter a series of exoteric circumstances as revealed by the Lower Arcana of the Tarot.

If Sir Richard survives his great exoteric adventure, he will be initiated step by step into all 22 houses of the esoteric Upper Arcana.

Sir Richard quest will be mapped on a 9 x 9 shogi board. Each square of the original board can be magnified to reveal another 9 x 9 shogi grid, each square of which measures approximately 1 square mile.

Whatever incidents occur in the squares of the smaller shogi boards will be played out on a tabletop or floor with Minifigs using the rules that I wrote for the Kingdoms Knights games such as this one that I created for the entertainment of my daughter and (or chiefly) myself a few years ago.

I will use dice to map the terrain and the inhabitants thereof. I will draw one tarot card per “game day” in a deck that will consist of all the lower arcana and only one upper arcana at a time.

The upper arcana will be added to the deck in order, beginning with The Fool. The knight’s aim is to survive and thrive until he attains initiation into arcana 21. Each arcana will affect his character and his prowess.

I will write more about the guidelines, but Legendorama is as much a process of storytelling as it is a game with fixed rules; a combination of algorithmic and heuristic processes, an adventure of the imagination that will draw on the poetic, mythic, episodic and quixotic wellsprings of our history and literature.

One thought on “Introducing Legendorama – A Mythopoeic Minifig Questing Game”