Just as Sir Richard was about to put on his armour, assisted by Squire Patrick, Christopher, Peter and Perkyn the page, his two hounds, Merriman and Belman, began barking and ran out onto the heath, alerting the company to the arrival of trouble, as was prefigured by the 5 of Rods in a previous blog post.

A hostile-looking band of men had appeared in the distance and were approaching the camp. 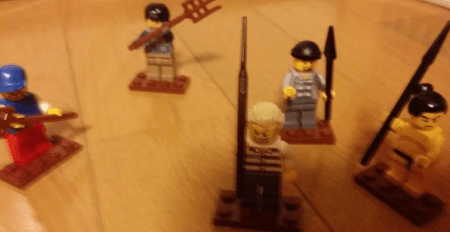 It was not clear whether the unruly band of men, five in number, armed with sharpened staves and pitchforks, were intent on trouble, but they certainly did not seem friendly.

Gilbert the yeoman was the first of the party to respond to the alarm. He mounted his horse and rode out to place himself between the camp and the approaching band, with Belman and Merriman by his side. 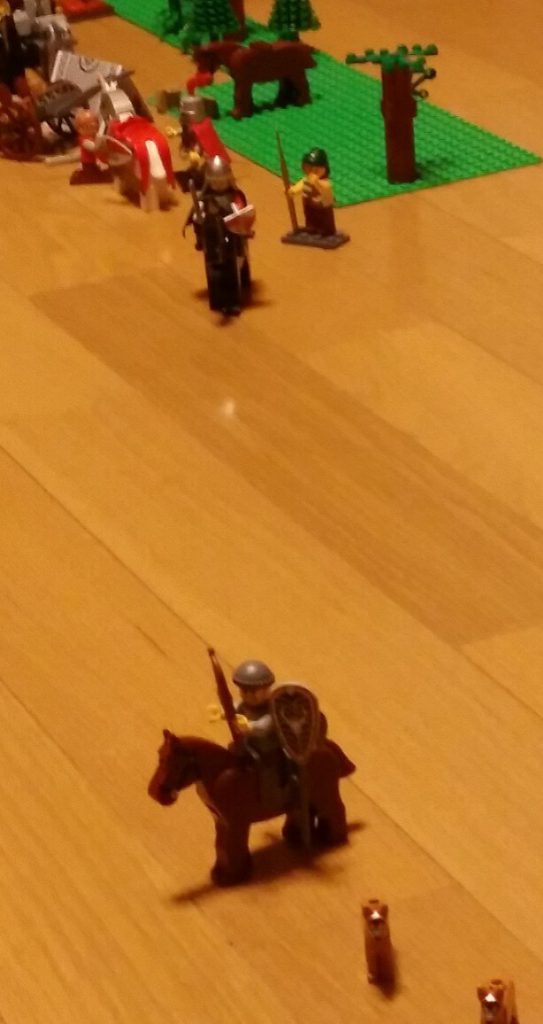 While Gilbert was riding out, Squire Patrick hurriedly left the arming of Sir Richard to the servingmen and gathered his gear from the riverbank. He put on his helmet, sheathed his sword, and then mounted his horse to join Gilbert.

Christopher and Peter helped Sir Richard into his armour while Perkyn made ready his charger.

As soon as Peter had helped Sir Richard put on his helmet he picked up a spear and went back to his wagon to fetch his crossbow and bolts.

Meanwhile, Gilbert had fitted an arrow to his bow and awaited the approach of the five men.

As the band approached they formed a somewhat ragged line and considered what to do.

Their thoughts and feelings were revealed by a deck of playing cards with three jokers in it.

Each suit represented a tendency for each minifig in this specific group:

Diamonds = the minifig is keen to trade, barter or negotiate.

Hearts = uncertainty. The minifig is malliable; his heart can be turned.

Spades = the minifig fears us and our weapons.

Here’s how it was done:

Once contact had been made between the two parties, the procedure was repeated for each turn of the game. 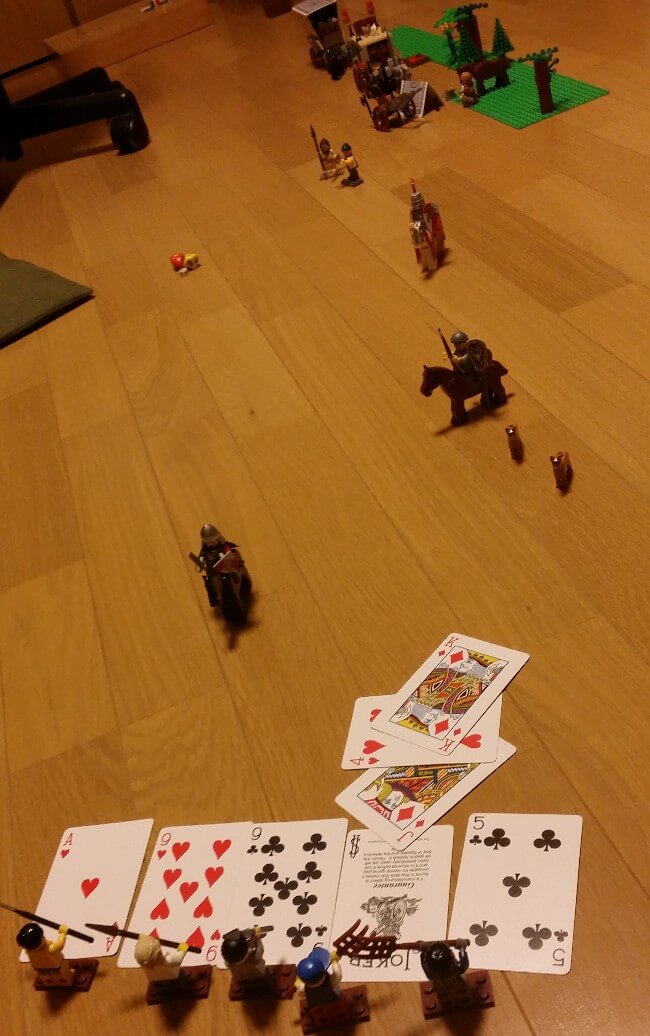 Contact was made when Squire Patrick rode ahead of Gilbert to attempt to parley with the men.

What the first turn of the cards revealed was that there were two fellows who were keen to fight (5 and 9 of clubs), and one who was very keen to trade or negotiate (jack and king of  diamonds) , but also willing, up to a point, to go with the flow (4 of hearts). The other two men were more malliable (ace and 9 of hearts).

Clearly the 9 of clubs guy in the middle of the group was the influencer, with the other clubs and hearts guys following his lead. The king of diamonds was more independently minded, going along with the group, but keen to look out for himself.

While Squire Patrick was speaking to the men, Sir Richard mounted his charger and drew near, with Peter and Christopher bringing up the rear on foot.

Ignoring Squire Patrick’s appeal, the band continued to advance. Squire Patrick retired before them until he was joined by Sir Richard.

Gilbert, seeing Sir Richard moving up, did not wait to see what the outcome might be but shot his arrow at the advancing men.

His aim was true and he struck down the most belligerent of them (9 of clubs). Struck by the force of the arrow, he fell to his left and bowled over the man next to him (9 of hearts), who struggled to his feet and retrieved his fallen stave.

Two of the men reacted to the death of their ringleader with rage (queen and jack of clubs) and rushed forward to attack. Although tempered by a degree of fear (ace of spades), the half naked fellow on their left flank flew at Squire Patrick who parried his attack and cut him down.

Likewise, one of the band attacked Sir Richard with a pitchfork, but was hampered by the attentions of Belman and Merriman, and summarily laid low by Sir Richard’s sword. (The outcome of man-to-man combat is decided by throwing a set of colour-coded 2×2 Lego bricks. I’ll post the rules of combat shortly.)

The fellow who’d been delayed by retrieving his stave, seeing two more of his comrades lying in the dust, hesitated in spite of the hatred in his heart.

However, the man in the blue hat, who had been keen to negotiate with Sir Richard’s party from the beginning, and had hung back from the initial attack (above) and fearing (9 of spades) the knights’ swords, threw down his weapon and raised his hands in surrender, calling on his one remaining comrade to do likewise. Seeing no other way out, the more belligerent of the two tempered his rage and surrendered (ace of diamonds) as well. 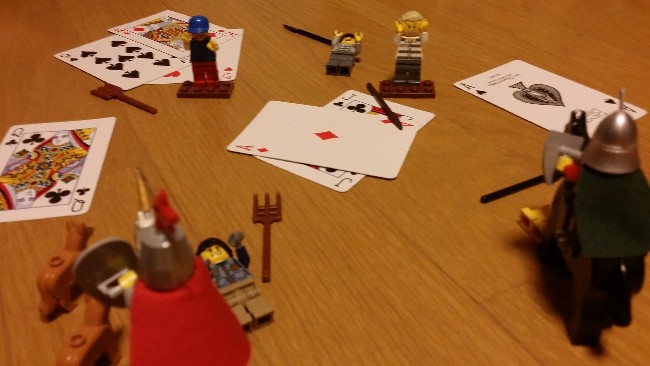 Thus ended the encounter foreseen by the 5 of Rods. In their first taste of combat, Sir Richard and his men had come through with complete success, earning themselves some valuable experience.

However, they now have a problem. What should do with the two prisoners?