Now that the sweet showers of April have pierced the drought of March to the root, the west wind has given life to tender shoots, and the stripling sun has run his half course in Aries the Ram, ’tis time for knights to ride out in love of chivalry, truth and honour, freedom and courtesy.

And so our knight, Sir Richard Radclyffe by name, ventures forth into an unknown land. His doughty yeoman rides on ahead to assay the land. Squire Patrick Forse rides with Sir Richard. The baggage train follows, managed by the page, the cook and the servingman.

Having journeyed a mile or so, they came to a river on their left which they are currently following.

The party rose at sunrise, id est, during the first hour of the day, and moved off during the second hour. They came to the river during the third hour and followed it for about 3 miles.

Drawing the Tarot of the Day 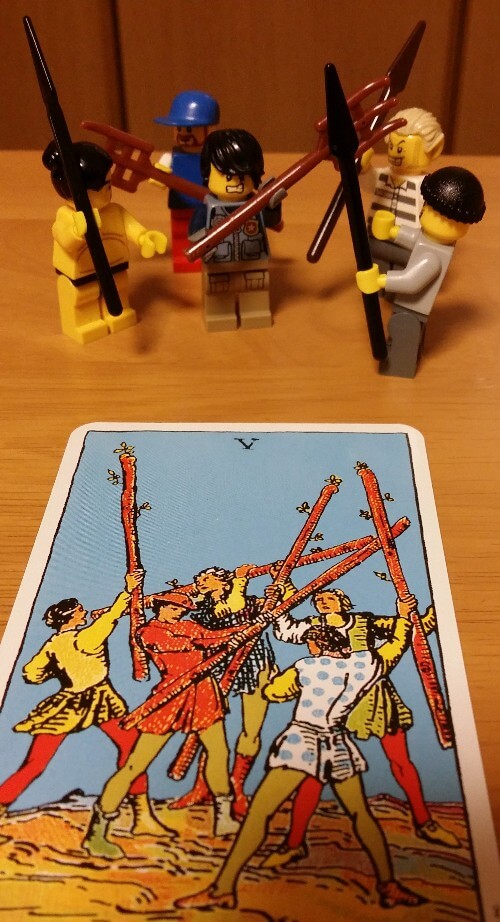 In the meantime, I drew the Tarot card of the day from the modified Rider Waite deck.

As I explained in the first Legendorama blog post a couple of days ago, all Upper Arcana cards except for the Fool have been removed. Play at the exoteric level will continue until The Fool appears.

The card I drew was the Five of Rods, which suggests that a bit of trouble is in store later in the day.

To find out how much later, I threw a ten-sided die, which landed a 5.

Counting the hours from about 10 am (1), where we left our party following the river, a roll of 5 suggests trouble in the form of a small band of brigands around the ninth hour of the day, sometime between 2pm and 3pm.

Good Progress in the Morning

The party travelled until midday. As they are travelling with baggage wagons, they are going at walking pace, or a little faster if the going is good, with the yeoman trotting ahead and from time to time waiting for the main body to catch up.

If the going is good, the party should be able to cover two squares of a shogi board (7.2 miles), and the yeoman may have scouted an extra square.

First we must make sure there were no misadventures in the first shogi square. 2 x d10: any double = a misadventure.

As there were no misadventures, and the terrains was not hilly or mountainous, and the weather good (which is why Sir Richard departed on 1st April), it seems the party were able to make reasonably good progress without incident up until they stopped for refreshment at midday.

As the die rolled a 4, progress was normal, which in the open, flattish terrain we are passing through, suggests a speed of 2.4 mph.

Slow = 1.8 mph, normal = 2.4 mph, fast = 3.6 mph. Travelling fast, the horse and wagons could clear 1 shogi square in an hour. (However, it seems reasonable that the faster pace would also increase the odds of a misadventure.)

The yeoman, trotting ahead at an average of about 4.5 mph, was able to survey the scene beyond the second shogi square. He saw that the river meandered to the left with the heath continuing ahead.

And so the yeoman trotted back to the party and reported his findings to Sir Richard.

The party stopped by the river to water the horses and refresh themselves.

And so ended the morning of the first day.