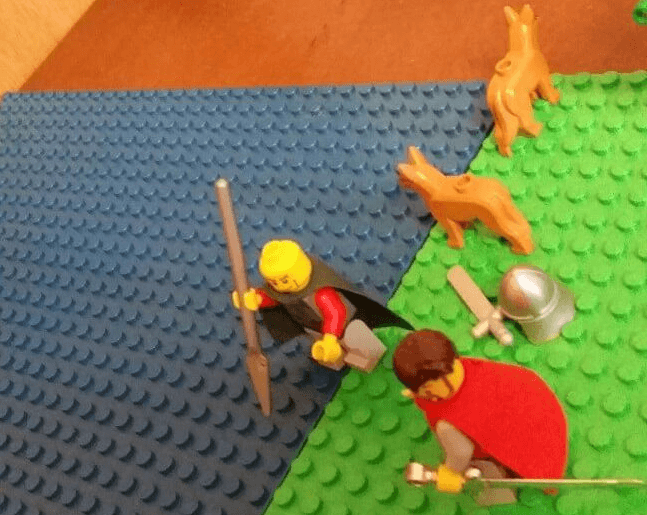 As Sir Richard and his party travel through a strange land and sit down by the river for their repast, their location is plotted on a shogi board. The landscape they have discovered is also laid out.

The blue chips mark the course of the river and the white chip represents open land such as heath or moorland.

As Sir Richard and Squire Patrick surveyed the scene, Sir Richard lamented that the party had no hooks, lines or nets to try their luck fishing in the river.

It then occurred to Sir Richard that the spot they were one would be an excellent place for a river fishery. A fishery just here could keep the party supplied with fresh fish while they are in the proximity, or salted fish as they move further afield. The surplus could be traded or bartered.

However, that raises several questions as to the nature of fishing in medieval times. It seems that a weir would be the most likely option, with a fish processing shed alongside.

According to regia.org/research/life/fishing.htm and siglindesarts.wordpress.com/medieval-fishing/ , the nets of the weir would be made of hemp nettles. Since hemp nettles were common wild plants in those days, procuring nets, or hemp thread wherewith to make them, should not pose a big problem.

Wood for the building and the stakes of the weir will also have to be sought out and cut.

Our party have a couple of hefty axes, but they lack planes and other carpentry tools. Clearly they need to find a carpenter or two, as well as a couple of hands to manage the fishery once it has been built.

Such were the contemplations of Sir Richard as he sat by the river with Squire Patrick, who scanned the water for fish that might be speared.

I felt reasonable odds of spearing a fish might be if two ten-sided dice gave doubles. On the few attempts that Squire Patrick made, the fish got away.

Then, in the distance, Gilbert the yeoman approached, returning from scouting the land that lay ahead.

First published on DavidHurleyInJapan.com in September 2018